Looking at my power problems with the Bosch Fat Packs (BFP) in series has caused me to rethink why this is happening. It seems that if one battery out of the two in series is lower or less capable than the other in the pair, it may cause the weak one to drain to near zero. In order to minimize this lower pack issue, I'm going to first rewire the setup so that the batteries aren't in series with only one other BFP. This is how I had the packs when I was having all the issues: 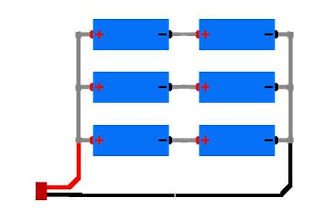 I'm going to rewire the packs so that the cells can't draw from only one pack at a time by connecting and distributing the power this way. 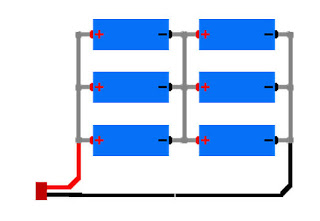 See the connection in between all of the packs at the common junction point? Hopefully this will take care of the problem.