Since I'm starting a new season of riding, I thought I'd update the look of the blog to reflect this. It's a more muted look which should make it less jarring when you first hit the page! I cleaned out my work area over the weekend so am readying my bike for my first commute which I hope to be this Friday. The forecast is terrific and I should be able to get to work in very nice weather. I'll post some pics of various things I'm working on shortly.

Ambrose
Posted by AmbroseLiao at 5:54 PM No comments:

I took my ebike to my LBS (local bike shop), City Bikes in Chevy Chase, Maryland to have them install my higher-speed crank which has 52 teeth. This is a significant jump from my 48 tooth version previously. I hope to be able to pedal along with my bike rather than pedal in futility since my bike goes faster than I can pedal! I've also picked up some parts to allow me to hook up my 6 Bosch Fat Packs in a 72V 6.6AH pack rather than the 36V 13.2AH pack now.

The only drawback is that because of the larger crank and the spacing of the three cranks, my shifter configuration won't allow it to shift my bike chain to the low 30 tooth crank. It's not a problem since I never shift to the middle crank let alone the low crank! 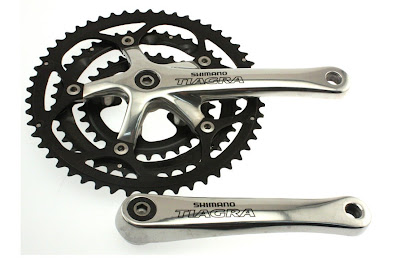 More later,
Ambrose
Posted by AmbroseLiao at 12:08 PM No comments:

As the Crow Flies

Using Mapmyride.com, I created a video of my commute from my home to my office. Imagine yourself a bird following me from about 500 yards up!

More later,
Ambrose
Posted by AmbroseLiao at 5:00 PM No comments: