A Visit From an e-Biking Neighbor

A few months ago, I met a fellow ebiker while taking my Tidalforce iO cruiser out for a quick run. He came alongside me and introduced himself. He was riding a folding bike called a Downtube 9FS. What what really got my attention though was the huge hubs on his 20" bike! He had an EMS 1,000W motor and front hub battery on his bike! He was thrilled to see that there was a  fellow e-biker and owner of a Tidalforce bike! In case you don't know, EMS or Electric Motion Systems was the company that was formed from the ruins of the Wavecrest Labs or Tidalforce bike company. The technology is amazingly similar in many ways. The motors and hub batteries look very much alike and are based on similar technologies and many of the employees were former Tidalforce employees. EMS was also known as E+.

Steve stopped by Saturday morning to talk ebikes since he had heard that EMS had recently gone out of business. I got a chance to finally see an E+ bike up close and take some pictures. 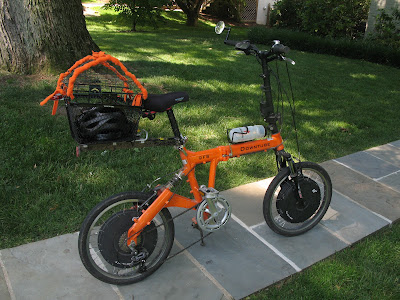 This is actually Steve's wifes bike. That explains the uhm, interesting basket on the back. She often takes her little terriers out riding with her and they love the custom basket for the view! The orange fabric is to protect the pups from the edges of the basket and to tie the basket lid to the basket itself. 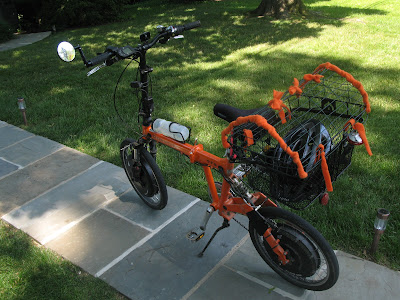 The E+ Downtube 9FS in all it's orange glory. This is a pretty amazing little folding and full-suspension ebike! 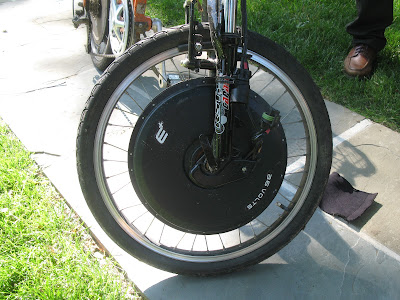 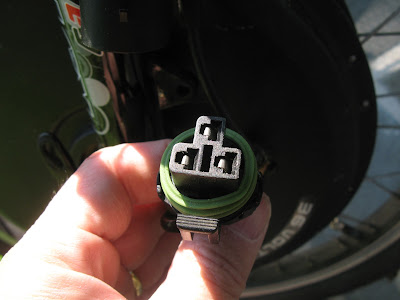 The 3 pronged front hub battery connector and charging port. Steve said that you disconnect this plug to connect the charger. 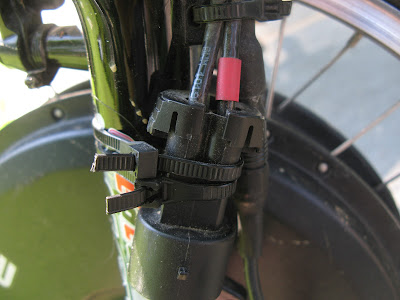 The matching female plug attached to the front fork. 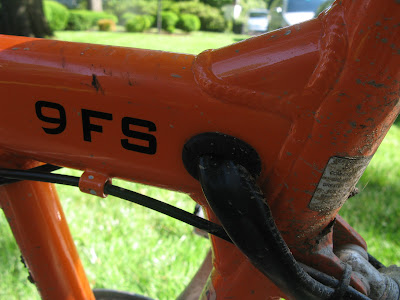 The hole in the frame near the seat tube where the wires exit. I don't have a photo of the front hole. 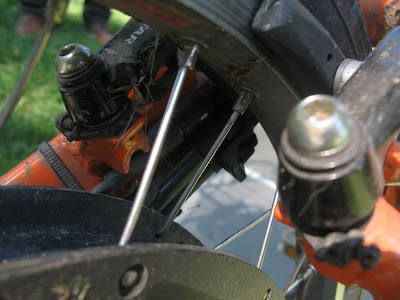 The rear battery and controller connector tucked along the frame just below the rear brake bosses. 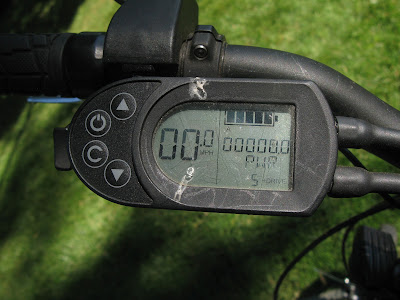 The LCD console along with the removable console connectors. 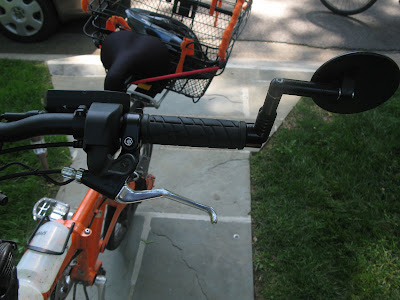 The left hand grip with the throttle placed on this side. Steve said that it was more comfortable than the right side because it was too far away from a natural thumb position. 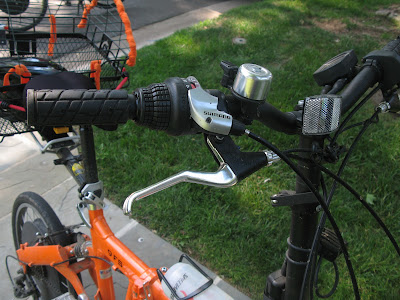 The right side with the trip shifter and bell. 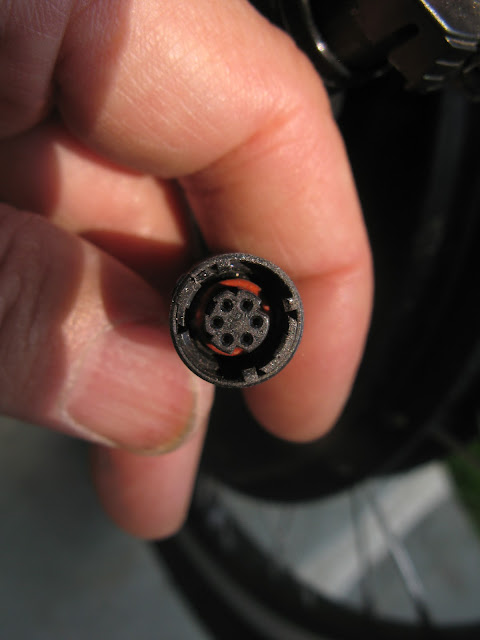 The data connector to the console is a 6 pin affair. 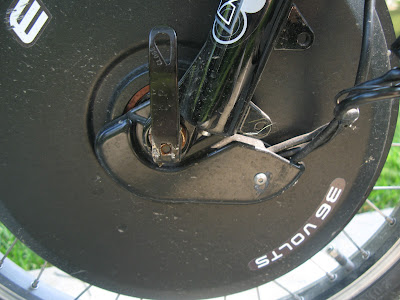 The data and power connectors enter the front hub here very similar to the Tidalforce connector. 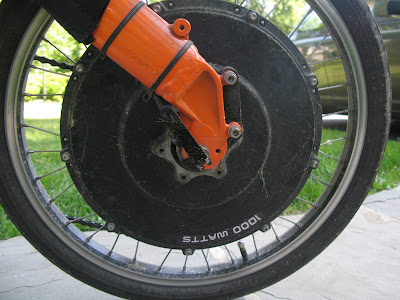 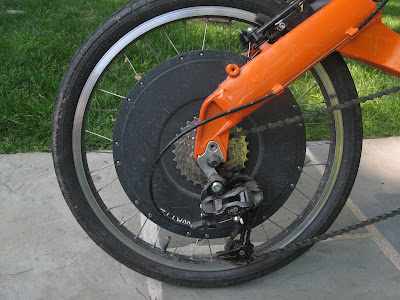 The rear derailleur sits very low to the ground on this 20" wheeled rear. Steve says that it was a challenge to fill the tires with air since the gap is so small. He found a motorcycle L adapter that works in this situation. 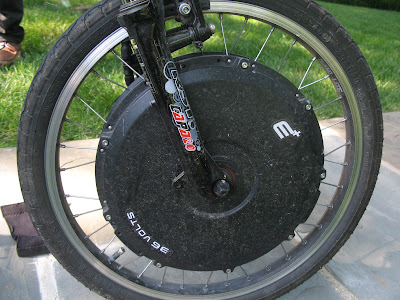 Here's the motor which is very slick looking compared to the ribbed Tidalforce motor. It reminds me of the newer Crystalyte motors. These came first, I believe. 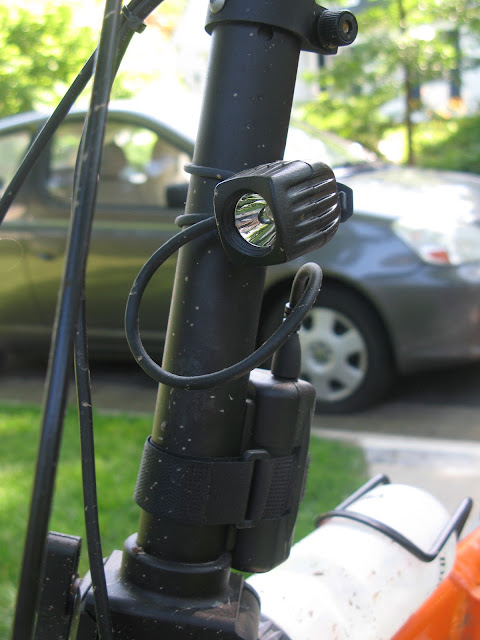 I'm not sure the make, but here's Steve's compact LED headlight mounted to the steering tube.

All-in-all, it was a very pleasant way to spend a Saturday morning. I hope to go visit he and his wife at their home in the near future and perhaps go for a long ride together!