In order to put together an electric bike, the first and most important component is the motor. This distinguishes the bike from every other bike out there. There are many popular brands out there: Wilderness Energy, Crystalyte, Bionx, eZee, etc. Walmart even sells electric bikes complete and ready to go!

I wanted something that was well made, and that contained virtually everything that I needed without having to mix and match the electronic components.
There are many resources on the web. Two that I frequent are: The eBike forum on Bike Forum.net and the other is Endless Sphere. I also lurk on the Tidalforce Group on Google.
While lurking on the Endless Sphere's for sale board, I noticed a new dealer had set up shop and was offering their 36V 500 watt front hub motor complete with controller, throttle, brakes with engine override for $244! This was $150 less than what they normally sell for on his website. I couldn't refuse the offer and jumped on that deal and am very happy. The company is E-Bikekit.com. It's a fairly new storefront and Jason is a very responsive and energetic owner. He shipped the conversion kit the very next day and because he's not far from my home in Maryland, the kit arrived the day after that! I've posted some pictures here. 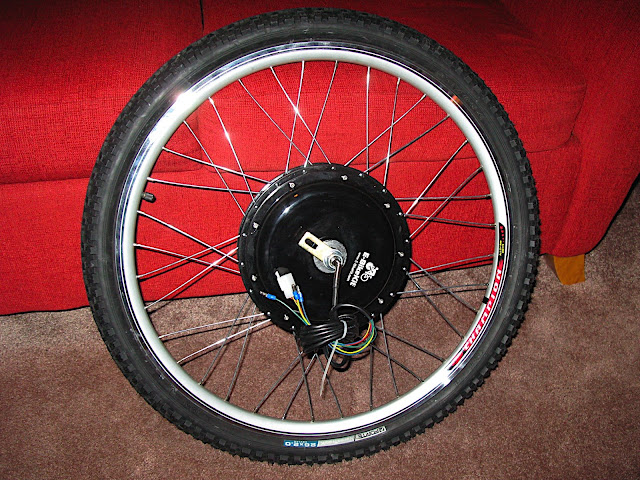 The very next day on Endless Sphere's forums, a user named "oatnet" posted that he had just bought a huge lot of Tidalforce frames and parts. Tidalforce was a company based in Virginia that was a pioneer in the ebike business. They forged ahead when the world wasn't quite ready for a quality ebike. Their trade name was Tidalforce but their company name was WaveCrest Labs. They folded a few years ago and sold many of their components to wholesalers who parted them out via eBay and the web. Tidalforce parts are getting harder and harder to find. So when Oatnet posted that he had frames and parts, I send a quick message to him that I was interested. He said that he wanted to sell the parts as a lot to a wholesaler since he didn't have the time to sell these components individually. I asked him to keep me in mind if he ever decided to sell individually.
In the meantime, on the Tidalforce forum, Deerfencer3 (a regular contributor to the TF forum), posted that he had a couple of Tidalforce S750 frames he wanted to sell for $50 plus shipping. The S750 was one of TF's last offerings. It was a hardtail mountain bike frame with the 750 or 1000 watt Tidalforce motor system. I quickly responded and bought a satin silver frame from Deerfencer3. It arrived last night. photos to come!
Yesterday, Oatnet sent a quick note to me saying that he was not ready to sell individually. I quickly said that I would take one of everything that he had. So, I am getting almost all the parts necessary to complete a Tidalforce S750 bike: front crankset and triple derailleurs, rear cassette, v-brakes both front and rear, seat, handlebars, pedals, brake levers and a chain!
I look forward to getting all of that so that I can start assembling my dream bike! This project is moving along very rapidly!
Posted by AmbroseLiao at 10:09 AM