I've finally replaced the internal battery on one of my Tidalforce front hubs with a new pack that I bought from Jason from e + electric bikes. He had 2 packs of unknown status that he wanted to get rid of and also a TF motor which turned out to be an X (1,000W) motor!

I took out the old dead pack from the S-750 front hub which had no voltage on it and tried to install one of the packs from Jason. It was missing the critical axle piece shown stuck partially in place here: 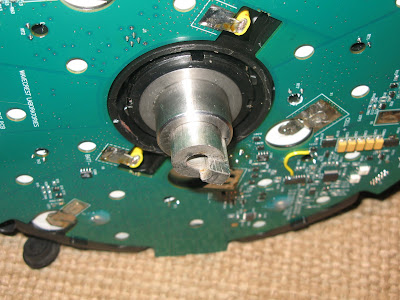 Without this keyed/tabbed piece, the front hub battery would not be able to hold the battery in place and would allow the front battery and axle to rotate and destroy the wiring coming out the other side. This piece is critical.

After I figured out how to remove one from one of my other front hubs (I used a 3/8" rod to force it out from the other side), I put the front hub back together again and closed up the battery cover.

Replacing the front hub battery cover is somewhat tricky. You must first place the cover roughly in place and then gently push it down to close it. At first, there will be a huge gap between the screw holes in the cover and the screw sockets in the rest of the unit. Gentle pressure downwards will eventually bring the cover down enough to place one or two of the 8 screws. After you get two on opposite sides of the case in place and you gently tighten it down, the other screws will also be reachable and easily tightened down. Tighten the screws around the rim bit by bit, keeping the pressure downwards somewhat even by tightening one screw at a time either in a circular fashion or going diagonally to the opposite side. The cover will eventually close and leave you with a tight seal. 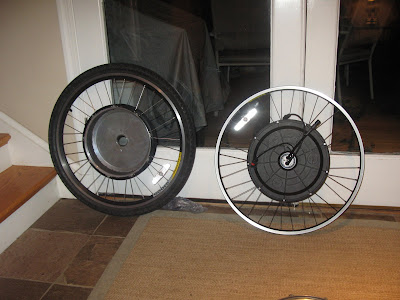 Here it is without a wheel on the right.

I attached the cable guide back on to the wheel and put the skewer through the axle and put it back on my S-750. I then ran the standard motor with this new battery and it ran great!

I just got word that the wheel and spokes as well as the console for my M-750 has just arrived so I'll have more on that shortly!