I was communicating with a young lady who lived in Minnesota when she joined the Tidalforce Google Group and was looking to sell her750 watt Tidalforce iO Cruiser. She had used it for many years and as it happens, the front hub was dead. She was looking to sell the bike. I was interested, however, shipping would have been exorbitant and I already had a iO Cruiser so wasn't too enthusiastic. After many weeks, she announced that she had put it on the local Craigslist and had sold it to a local buyer.

I soon got an email from the new owner who had researched fixing the front hub and was looking for help. I pointed him to the page on my blog about replacing the front hub battery with another battery.

He soon was on his way in the middle of a Minnesota winter enjoying his TF bike with a jury-rigged 3 lead acid battery setup.

Many months go by and I get another email from the new owner saying that he had purchased a battery on eBay but it didn't work with the TF. I didn't inquire why because the owner was now interested in selling the motor/controller/throttle. I made a silly offer and the seller accepted. I asked him to ship me the nipples and spokes from both wheels if they weren't needed anymore so now I also have 72 sets of those!

Here are the pics. 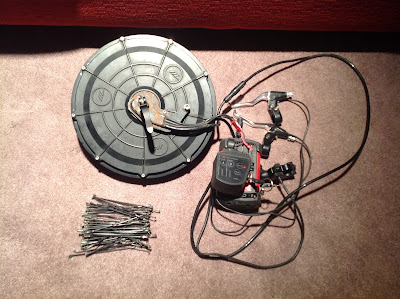 The 750 watt motor with console, throttle and brake levers all attached. The 72 spokes are on the carpet! 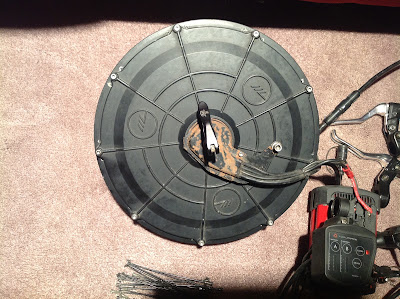 There's some rust on the torque arm but it should come off fairly easily. 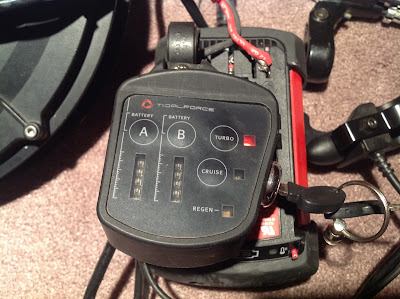 The console has a very neat key switch and has a very positive and short action. You can see one of my Bosch Fat Packs used to test the system. You can see the Turbo LED lit in the photo.