My next project is to build a powerful red tail light. One of the biggest problems with most bike accidents involves drivers not being able to see cyclists. Many cyclists don't even wear helmets let alone put lights on their bikes to aid visibility. I am firmly in the camp of "the more the merrier."

So far, I've got two lights on my helmet: a Planet Bike Superflash rear blinking LED light and a front mounted Coast 1W LED head light. On the front of the bike is the Magic Shine HA-III P7 900 lumen headlight. On the rear is a cheap Bell tail ight which is why I'm building "The Blinder."

The Blinder is 3 high powered red LEDs mounted in it's own case that puts out a brilliant amount of light. The driver circuitry will produce 6 patterns and use a LiFePO4 3.6V 5 AH battery pack. The three LEDs and one driver board look like this now. 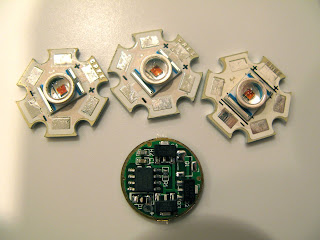 Posted by AmbroseLiao at 5:04 PM