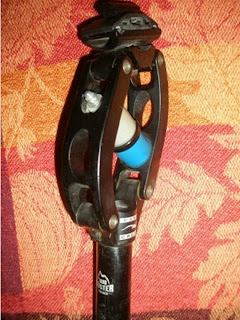 After many months and many failed attempts to find a used Thudbuster seatpost, I finally won one on eBay! YEAH!

If you don't know, the ThudBuster suspension seatpost is a very unique device. It is based on a cantilever design rather than the typical spring loaded design of other suspension seatposts. With the cantilever, there is no "stiction" for the seatpost to actually start working. Stiction is the phenomena of momentum not activating a compression until a certain threshold of downward force is applied. With the ThudBuster, the suspension is free to start compressing with very little force. This means a much smoother ride than a typical spring loaded seatpost.

Ambrose
Posted by AmbroseLiao at 10:43 AM