I tried again last night and was successful. I realized that handling and crimping those tiny pins was a huge challenge. I went out and bought a crimper from Radio Shack. 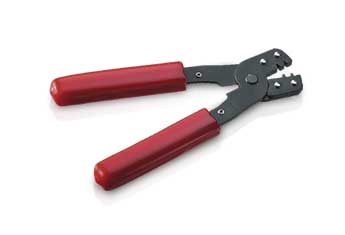 This handy $9 device made crimping those pins very easy. I assembled two in no time. I plugged in the jumper in the console and buttoned everything back up.

The location of the jumper installed is here: 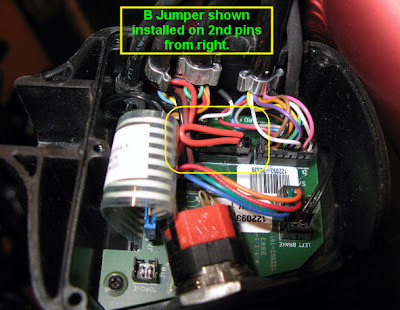 I plugged in one of my Bosch Fat Packs (BFPs) to the Anderson Powerpoles (APPs) located on the chainstay and pressed the "B" button on the console. Nothing happened. At first, I thought there was something wrong with my setup and perhaps I'd blown the console or worse, the controller! After calming down, I tried an experiment. Instead of just pressing the "B" button on the console, I pressed the lit-up "A" button for about 3 seconds. The "A" SOC (state of charge) leds turned off which didn't seem right, however, I tried the throttle and VOILA the motor spun! I disconnected the front data connector and the APPs from the front hub and it still worked! The only thing missing was a battery level indicator which I thought was fairly important.

I pulled out my trusty old DrainBrain standalone out of the closet and plugged it in to the system at the bundle where the motor connectors for power and data are located and it worked perfectly. Now I can plug in some of my BFPs which just happen to be the same voltage (41.5V fresh off the charger and 37V nominal) as what the internal hub batteries have. I even have a new front wheel with a disc brake hub ready to go on the TF iO.